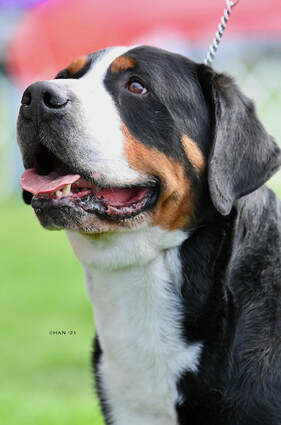 General Appearance
The Greater Swiss Mountain Dog is a Draft and Drover breed and should structurally appear as such. It is a striking, tri-colored, large, powerful, confident dog of sturdy appearance. It is a heavy boned and well muscled dog which, in spite of its size and weight, is agile enough to perform the all-purpose farm duties of the mountainous regions of its origin.

Size, Proportion and Substance
Height at the highest point of the shoulder is ideally: Dogs 25½ to 28½ inches. Bitches 23½ to 27 inches. Body length to height is approximately a 10 to 9 proportion, thus appearing slightly longer than tall. It is a heavy boned and well muscled dog of sturdy appearance.

Head
Expression is animated and gentle. The eyes are almond shaped and brown, dark brown preferred, medium sized, neither deep set nor protruding. Blue eye or eyes is a disqualification. Eyelids are close fitting and eyerims are black. The ears are medium sized, set high, triangular in shape, gently rounded at the tip, and hang close to the head when in repose. When alert, the ears are brought forward and raised at the base. The top of the ear is level with the top of the skull. The skull is flat and broad with a slight stop. The backskull and muzzle are of approximately equal length. The backskull is approximately twice the width of the muzzle. The muzzle is large, blunt and straight, not pointed and most often with a slight rise before the end. In adult dogs the nose leather is always black. The lips are clean and as a dry-mouthed breed, flews are only slightly developed. The teeth meet in a scissors bite.

Neck, Topline and Body
The neck is of moderate length, strong, muscular and clean. The topline is level from the withers to the croup. The chest is deep and broad with a slight protruding breastbone. The ribs are well-sprung. Depth of chest is approximately one half the total height of the dog at the withers. Body is full with slight tuck up. The loins are broad and strong. The croup is long, broad and smoothly rounded to the tail insertion. The tail is thick from root to tip, tapering slightly at the tip, reaching to the hocks, and carried down in repose. When alert and in movement, the tail may be carried higher and slightly curved upwards, but should not curl, or tilt over the back. The bones of the tail should feel straight. 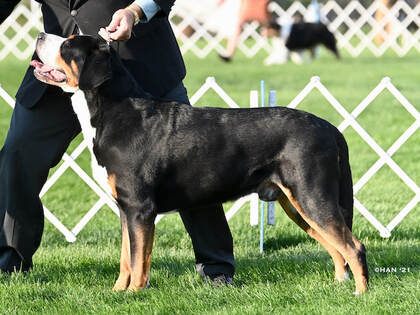 Forequarters
​The shoulders are long, sloping, strong and moderately laid back. They are flat and well-muscled. Forelegs are straight and strong. The pasterns slope very slightly, but are not weak. Feet are round and compact with well arched toes, and turn neither in nor out. The dewclaws may or may not be present.

Hindquarters
The thighs are broad, strong and muscular. The stifles are moderately bent and taper smoothly into the hocks. The hocks are well let down and straight when viewed from the rear. Feet are round and compact with well arched toes, and turn neither in nor out. Dewclaws should be removed.

Coat
Topcoat is dense, approximately 1-1/4 to 2 inches in length. Undercoat must be present and may be thick and sometimes showing, almost always present at neck but may be present throughout. Color of undercoat ranges from the preferred dark gray to light gray to tawny. Total absence of undercoat is undesirable and should be penalized.

Color
The topcoat is black. The markings are rich rust and white. Symmetry of markings is desired. On the head, rust typically appears over each eye, on each cheek and on the underside of the ears. On the body, rust appears on both sides of the forechest, on all four legs and underneath the tail. White markings appear typically on the head (blaze) and muzzle. The blaze may vary in length and width. It may be a very thin stripe or wider band. The blaze may extend just barely to the stop or may extend over the top of the skull and may meet with white patch or collar on the neck. Typically, white appears on the chest, running unbroken from the throat to the chest, as well as on all four feet and on the tip of the tail. White patches or collar on the neck is acceptable. Any color other than the "Black, Red and White" tri-colored dog described above, such as "Blue/Charcoal, Red and White" or "Red and White" is considered a disqualification. When evaluating the Greater Swiss Mountain Dog, markings and other cosmetic factors should be considered of lesser importance than other aspects of type which directly affect working ability.
​
Gait
Good reach in front, powerful drive in rear. Movement with a level back. 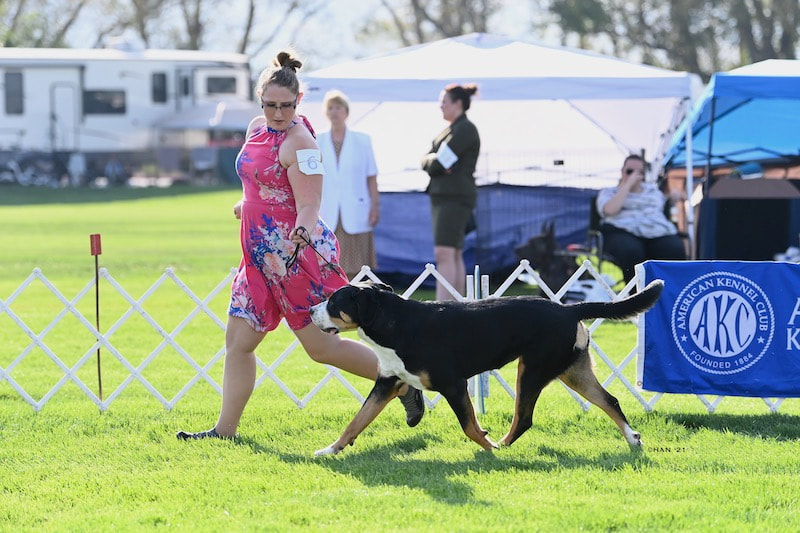 Puppy (now AKC Champion, Oct 2021) LuLu, 12 months. Just a kid, but all the right parts in all the right places.
Temperament
​Bold, faithful, willing worker. Alert and vigilant. Shyness or aggressiveness shall be severely penalized.

Summary
The foregoing is the description of the ideal Greater Swiss Mountain Dog. Defects of both structure and temperament are to be judged more severely than mere lack of elegance because they reduce the animal's capacity to work. Any fault that detracts from the above described working dog should be penalized to the extent of the deviation.